The Lotus – Sacred, Symbolic and Sustaining

A quintessentially Asian bloom and considered sacred among many of the world’s cultures, the lotus is not only regarded the national flower of Vietnam, it is as integral to Vietnamese culture and life as the bánh mì and cà phê sữa đá.

– every part is of the lotus plant is used in Vietnamese cuisine. The lotus flower and its stamens infuse flavour into green tea; rice dishes such as cơm sen are wrapped in older lotus leaves; young stems become gỏi ngó sen (lotus salad); the seeds are eaten raw, dried or boiled and used in chè hạt sen, a sweet soup; and the decorative sliced rhizomes of the plant can be found in dishes such as củ sen hầm giò heo (stewed lotus root with pork shank).

A symbol of Buddhism:

– in paintings and sculptures, Buddha is often found meditating on top of a pink lotus flower. The bloom is referenced in Buddhist practice – the way water droplets slide from the petals of the flower demonstrate the concept of detachment and the need to let go of lust, craving and desire. The lotus is also said to denote the purity of body, mind and speech within Buddhism.

– in both ancient and contemporary architecture, the lotus has been a source of inspiration. During the 11th century, an emperor ordered the construction of a lotus-shaped pagoda. Hanoi’s One Pillar Pagoda is located in the middle of a small body of water, symbolising a lotus flower floating lightly above a pond. Fast forward to 2010 Ho Chi Minh City, the curved shape of the Bitexco Tower in downtown District 1 is said to have been inspired by the shape of the lotus flower. Many locals, however, will argue the shape is more like a cob of corn than a lotus. Interestingly, Arch Daily, the well-known online architectural news site, refers to the design inspiration as the lotus leaf. This actually makes more sense visually, however, who are we to argue with the structure’s designer.

A propaganda symbol of peace:

– in wartime propaganda art, the lotus was used as a symbol of purity, beauty and peace. It was incorporated into war drawings, watercolours and posters produced between the 1950s and 1970s during the American/Vietnam War. According to Sherry Buchanan in the insightful book, Vietnam Posters, the lotus flower also featured on Viet Cong letterheads and stationary sent back to families in Hanoi.

In daily life at Very Ngon:

– we love the lotus. We buy beautiful bunches wrapped in an older lotus leaf for Hieu’s mum to add to her family alter. We use them in our product photo shoots, we try to grow the plant in our garden and at our workshop, and it features in our Propaganda Collection. 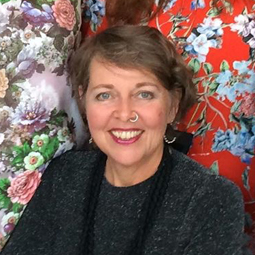 Bringing a slice of vintage Asia to & your home through the creation of beautifully printed homewares & accessories.